In terms of mileage, the 95 miles for this day made it our longest scheduled ride of the trip, but just barely. From Bellagio, the ride began with a climb immediately leaving the town and ascended over the course of 7 miles to the sanctuary of St. Ghissalo, the patron saint of cycling. We expected the climb to be to be steep in places, and it was! Those 7 miles also included some flat spots and a short descent, so the actual climbing portion probably averaged around 9%, with lots of stuff from 6-13% for the sake of variety. There were even some parts in the 15% range. It took us less than an hour to get to the top (about 2000’ of elevation gain) and the scenery was beautiful along the way. Lots of filtered views of Lake Como and even the wooded areas and large homes were impressive. Near the top, as the climb wound to the other side of the small peninsula housing Bellagio, we could see the other portion of Lake Como. At the top, St. Ghisallo’s sanctuary sits and is adorned with lots of bicycles and other memorabilia. Having left kind of early that morning, we arrived before most other cyclists making their pilgrimage and had the place to ourselves for a short time. We also visited the recently constructed cycling museum at the same site and it was also interesting; fortunately, everything was written in Italian otherwise we might still be there reading it all! We had a coffee and pastry before leaving the area and descended the other route down the mountain towards Milan. Our route skirted Milan by about 15 miles and as we were going through one of the many suburban areas, I realized that one of my front brake pads was shot. Luckily, we rode by a bike shop that was open and the owner of the small place replaced all my pads and adjusted the brakes. Thanks Augustino!! After what had already been a long morning, we still had about 60 miles to go and tried to cover ground as quickly as possible. The ride was flat, which helped in that regard a lot, but it was also over lots of highways that were long, straight, and didn’t pass through any interesting towns or even any interesting terrain. We mostly just rode through one cornfield after another and because there wasn’t much of a shoulder (and no bike path), we had to go single file. We rode quickly – usually over 20 mph – but it was tedious riding. About mid way through the ride we were in need of some food and water, but everything we passed was closed. Being on the highway, mostly what we saw were gas stations and small restaurants and bars, but I guess Saturday they are usually closed and we were getting a bit anxious about water and nourishment. One business that apparently was in full swing that afternoon was the world’s oldest profession. We were out in the middle of nowhere riding through agricultural areas and came upon a woman sitting on the side of the road in a folding chair. I had no idea what was going on and didn’t give it much thought until we started seem more and more women doing the same thing and it became clear what it was all about. Luckily, we found a restaurant and bar that was open for lunch and we tore into some penne arrabiata. The food was okay, but we really needed it and we needed a rest from the bikes. We filled up with water and headed out for the last 42 miles. Afterwards, Paul and I agreed that there was something kind of odd about the place and we figured it must have been some kind of a brothel. We got into Cremona around 4:30 and despite being really hot and tired, we were just glad to finally be there. The town of Cremona must be the home of Stradivarius or something because we have seem some mention of him and there are a lot of places that repair violins. We hung around the old part of town where our hotel is and had a few beers in the main piazza before trying to hunt down a good place for dinner. Until now, there has never been a shortage of restaurants, but last night was a challenge. Lots of people were out, but all we could find were bars and ice cream places, so we settled for some marginal food at a somewhat shady café. Trip Distance: 807 miles 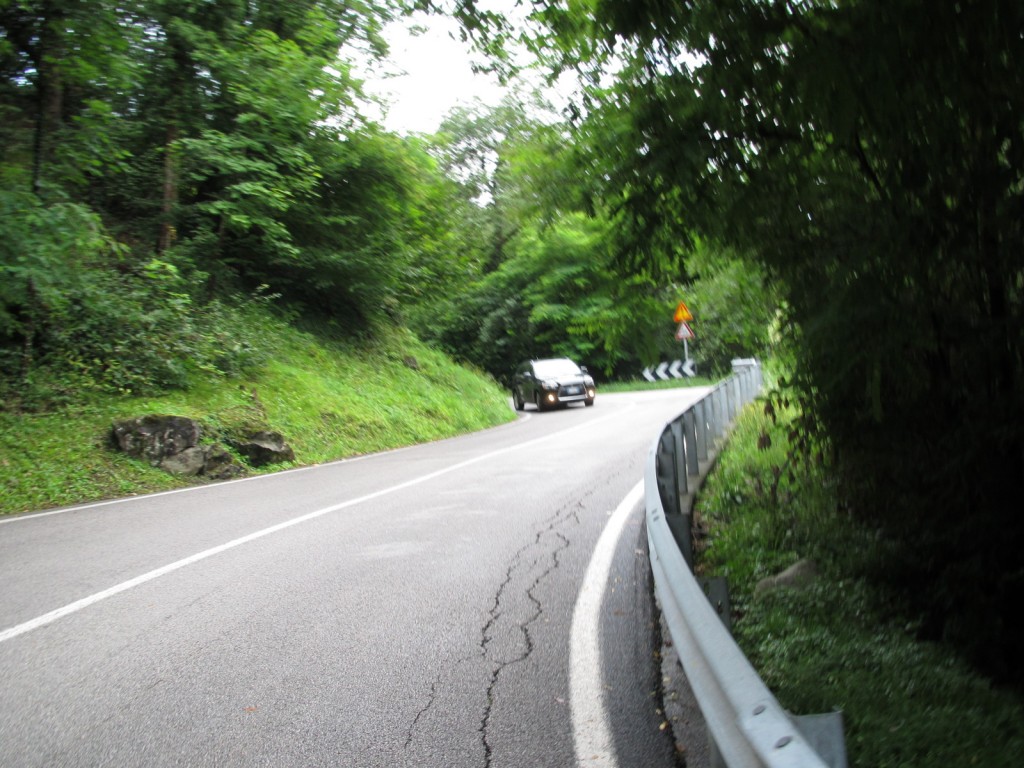 Pictures can't capture the steepness of the grade 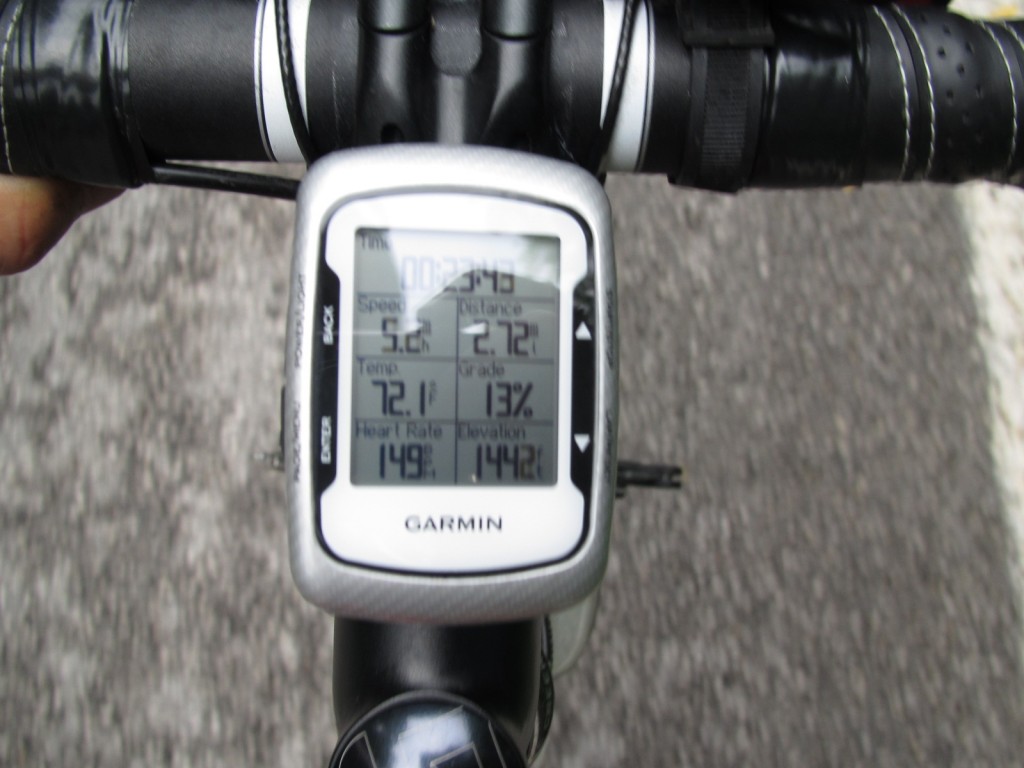 Garmin shows the grade being 13% 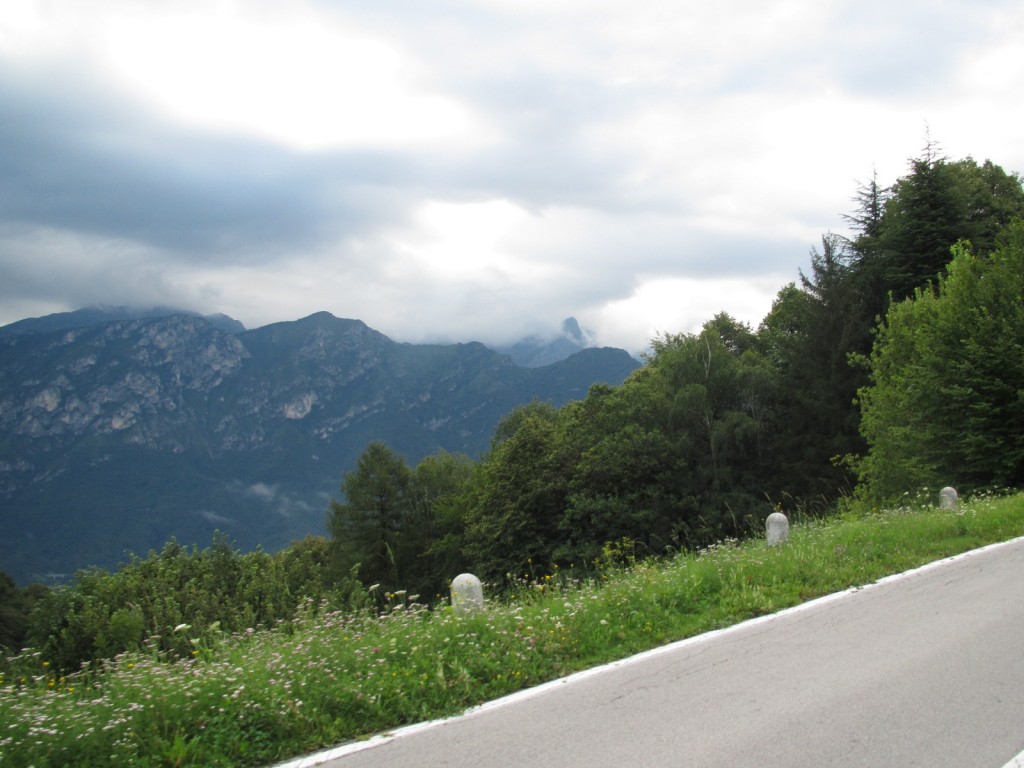 Further up the climb from Bellagio to Ghisallo's shrine 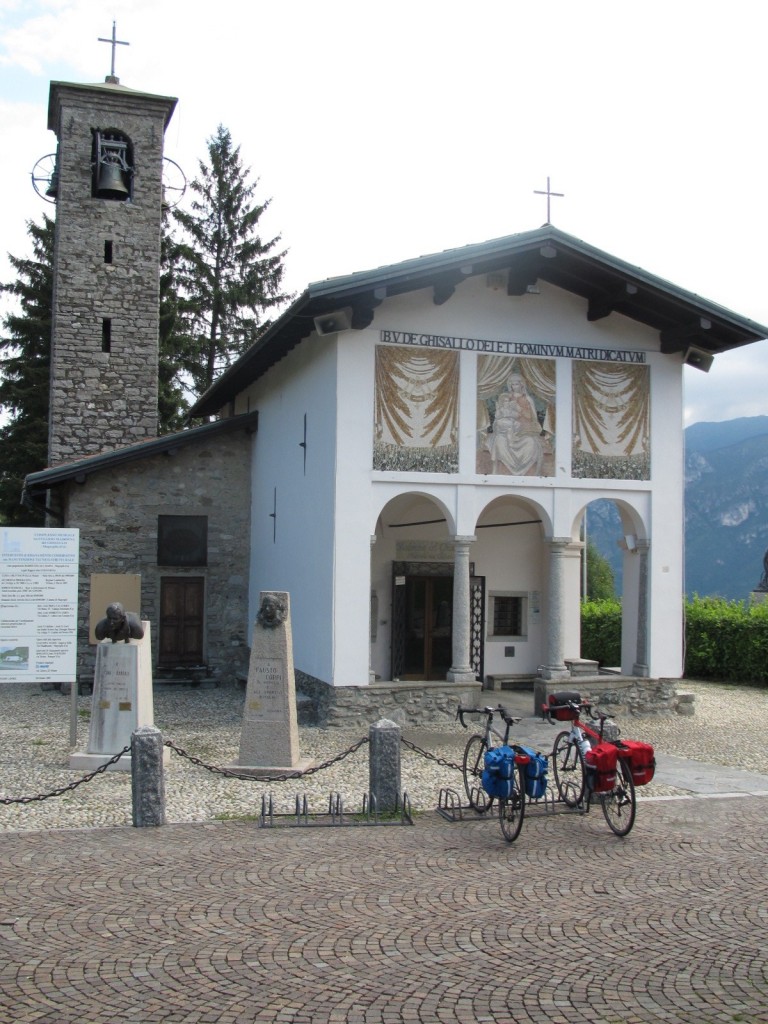 The shrine for St. Ghisallo, the patron saint of cycling. 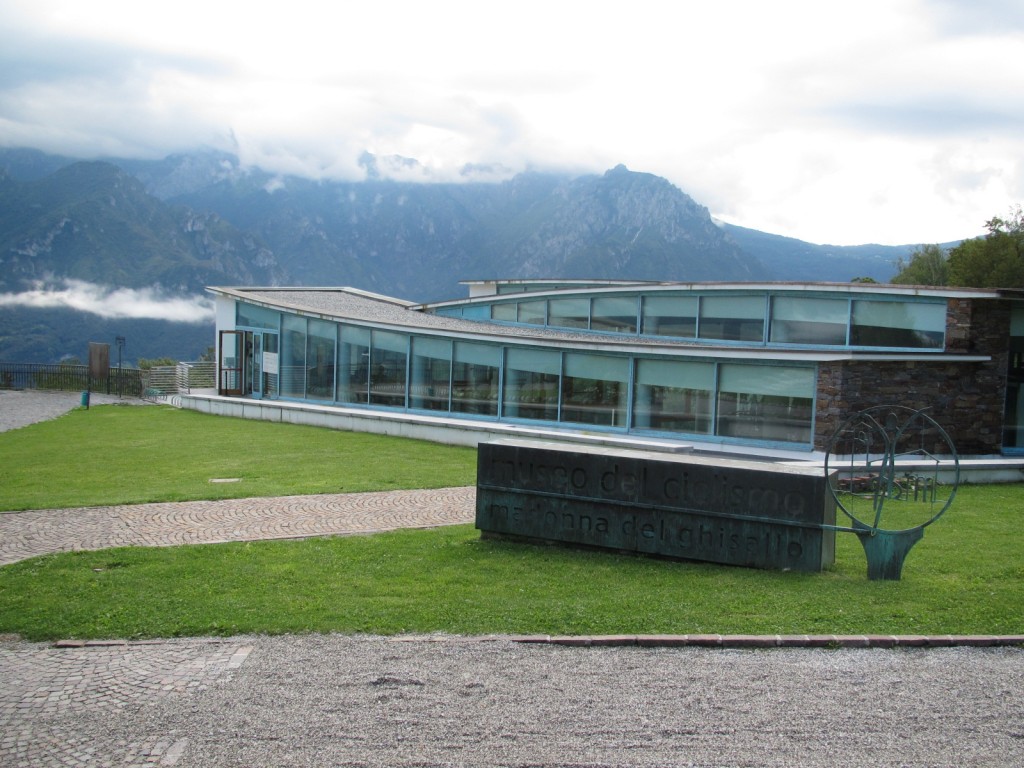 The international cycling museum next to St. Ghisallo's shrine 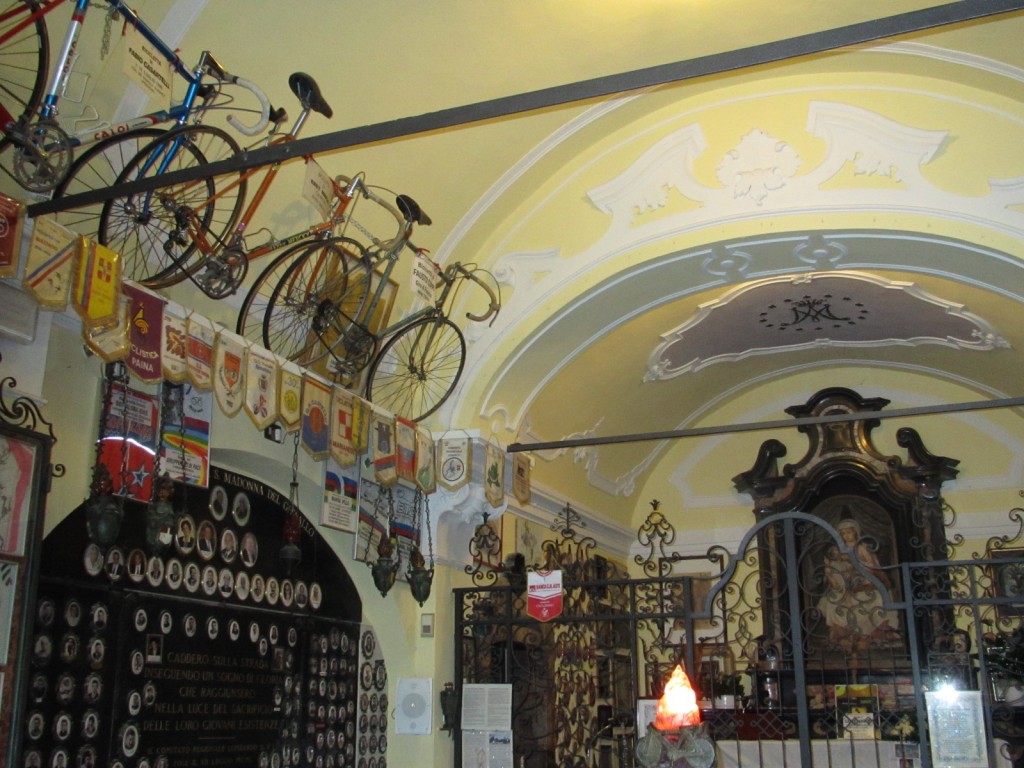 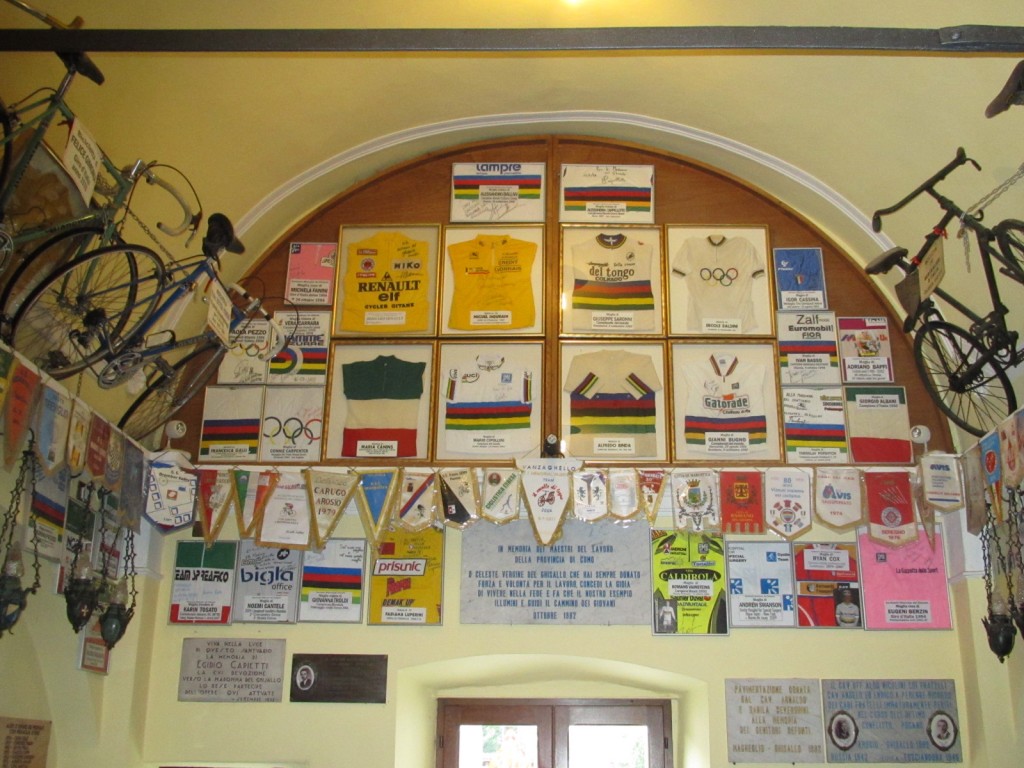 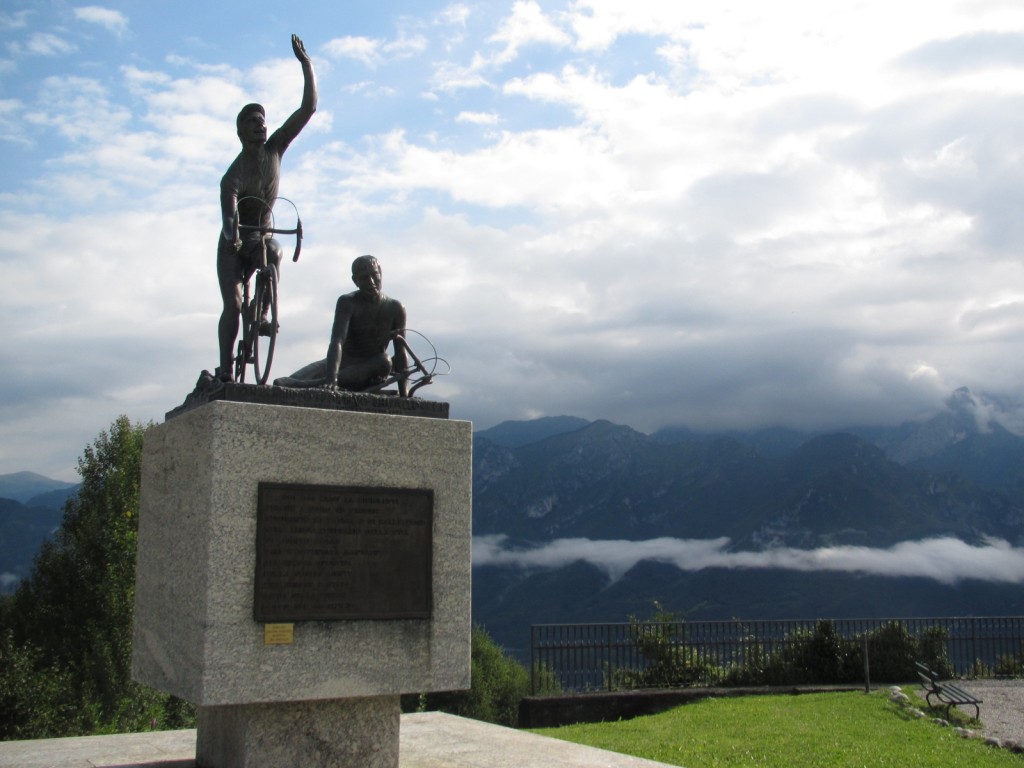 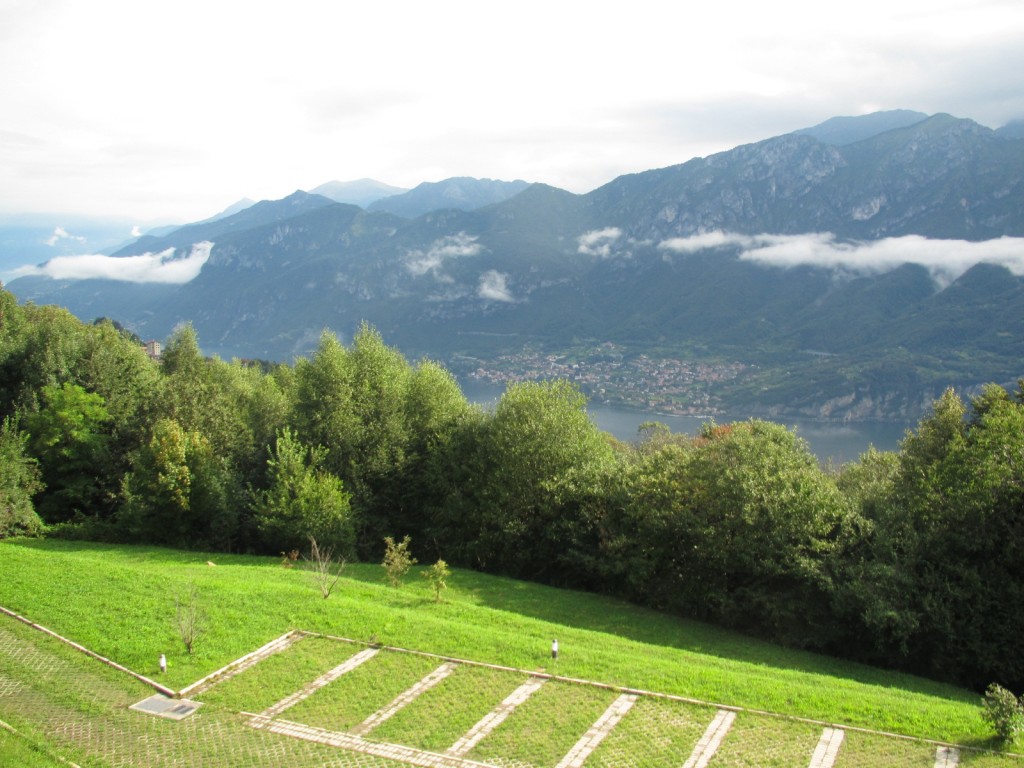 A view from near the cycling museum - if you click to enlarge the photo you can see Lake Como below. 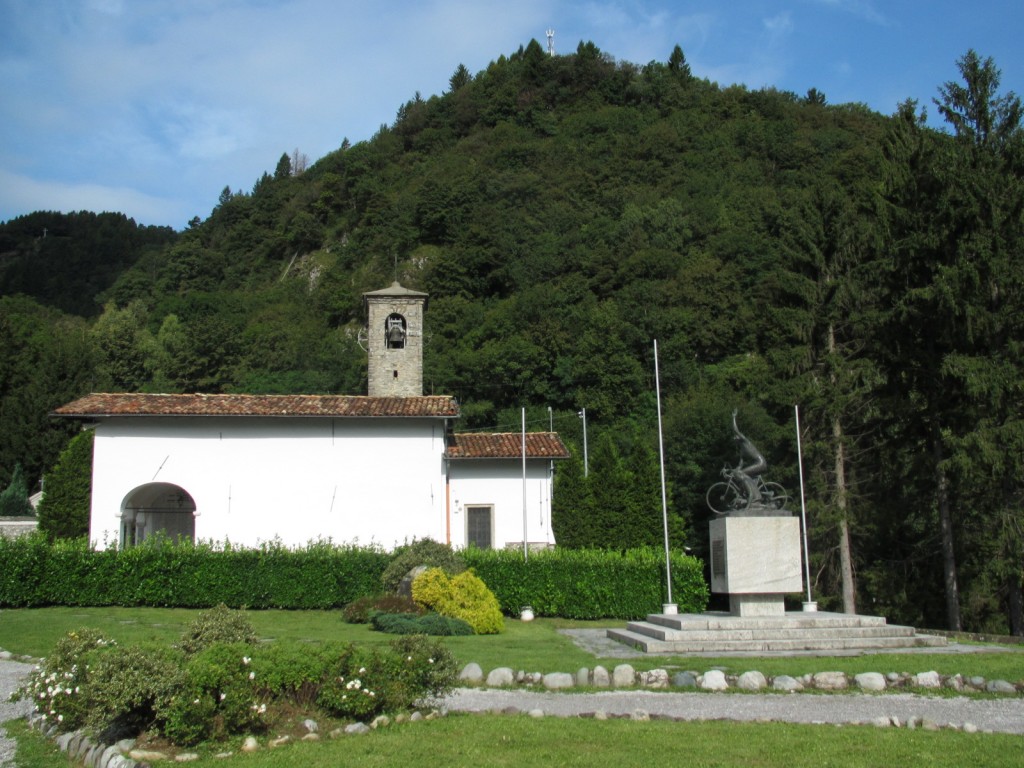 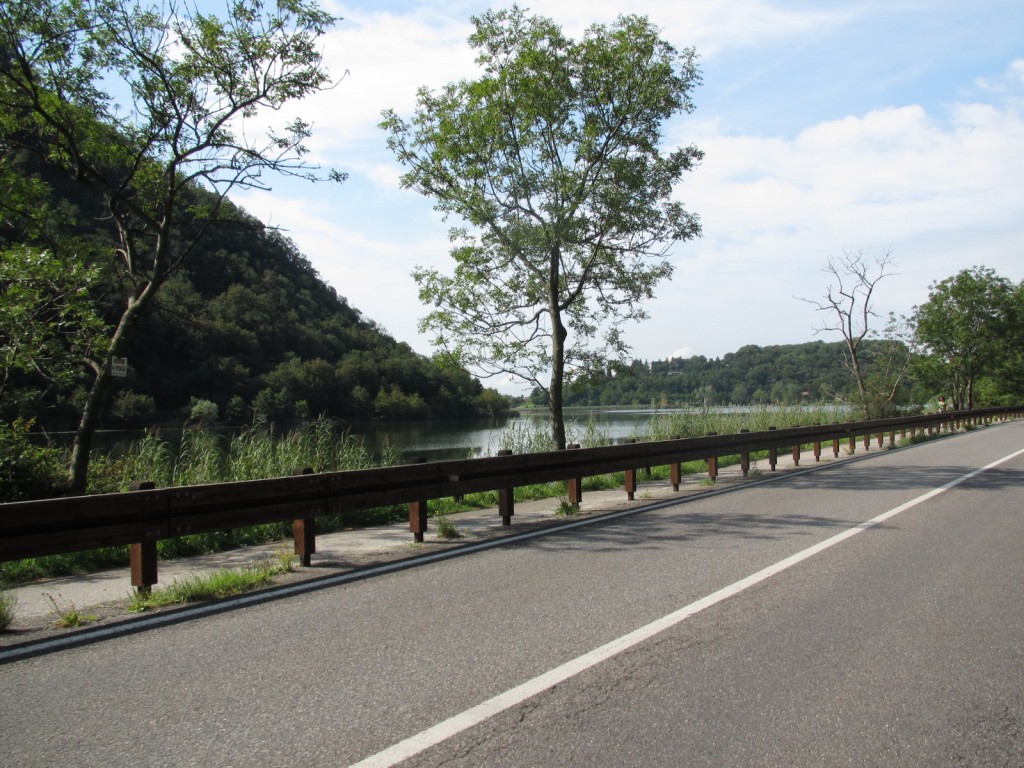 A nice area on the way to Milan 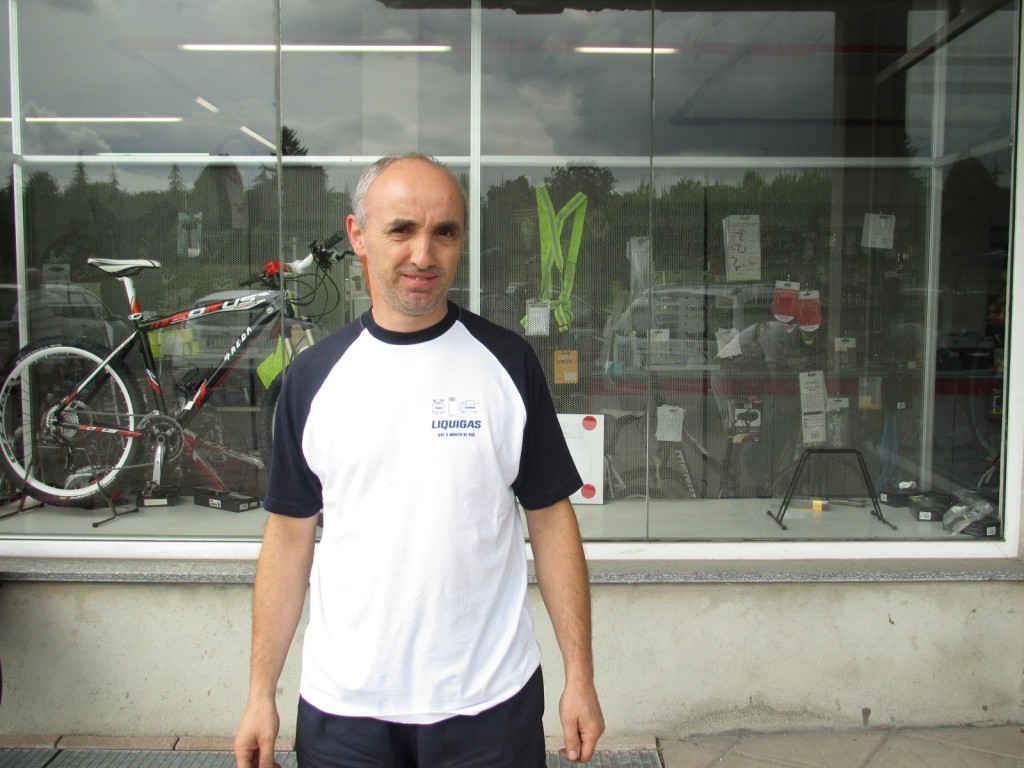 Augustino, the bike shop owner who fixed my brakes and then picked us some peaches from his tree. 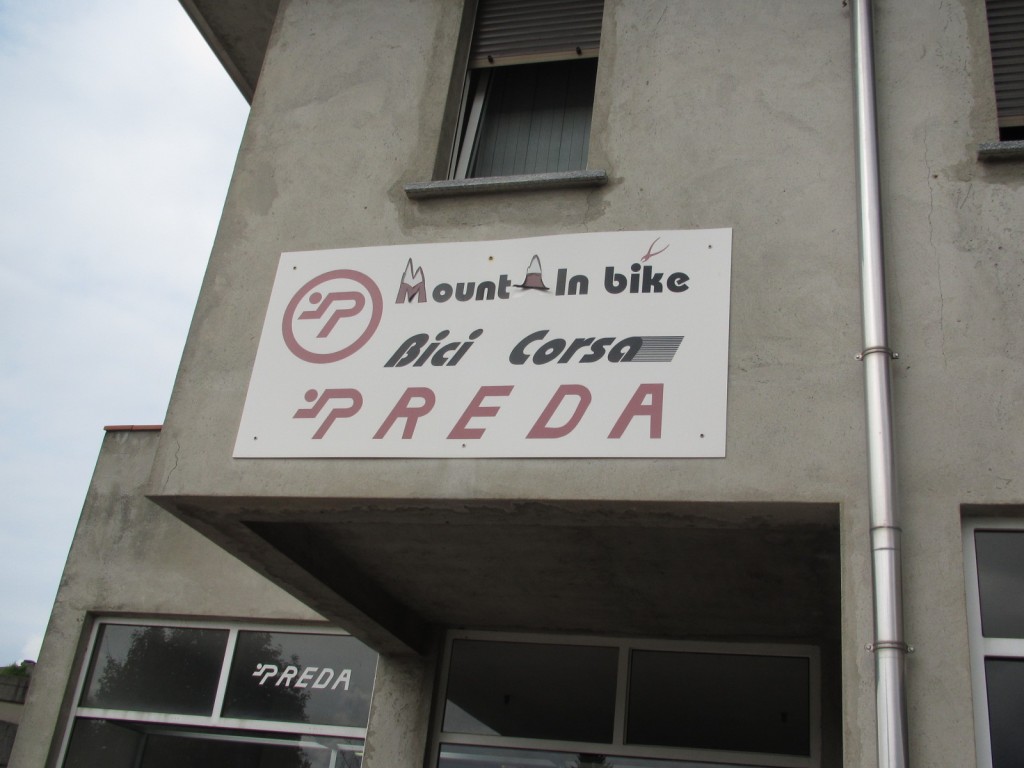 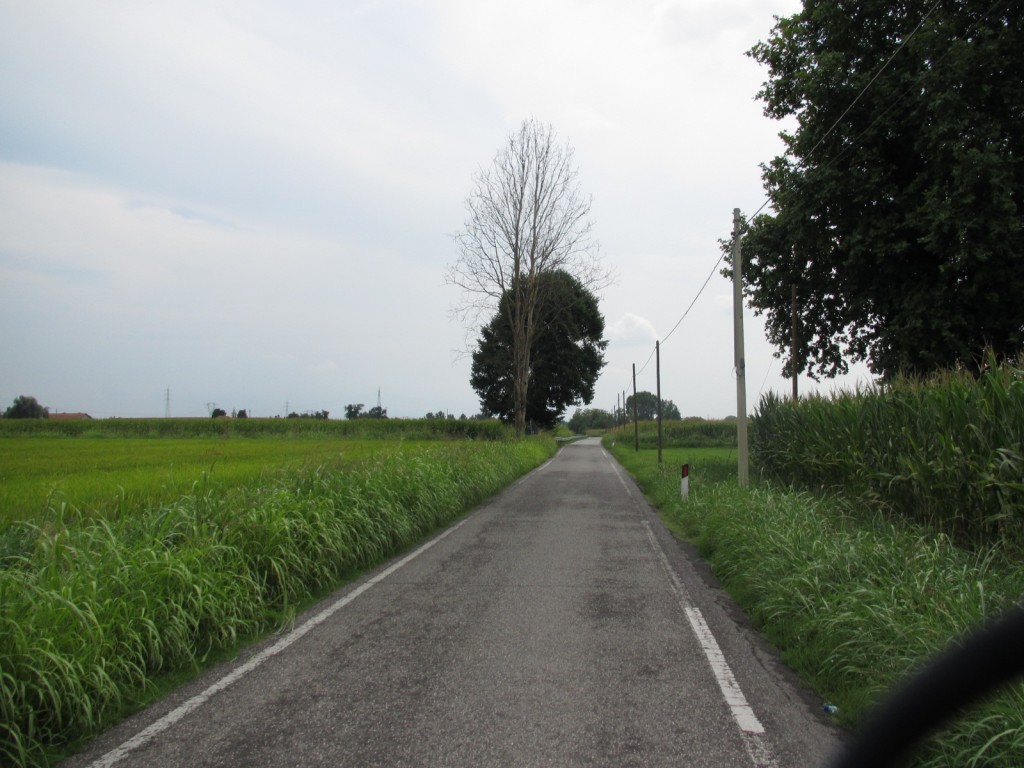 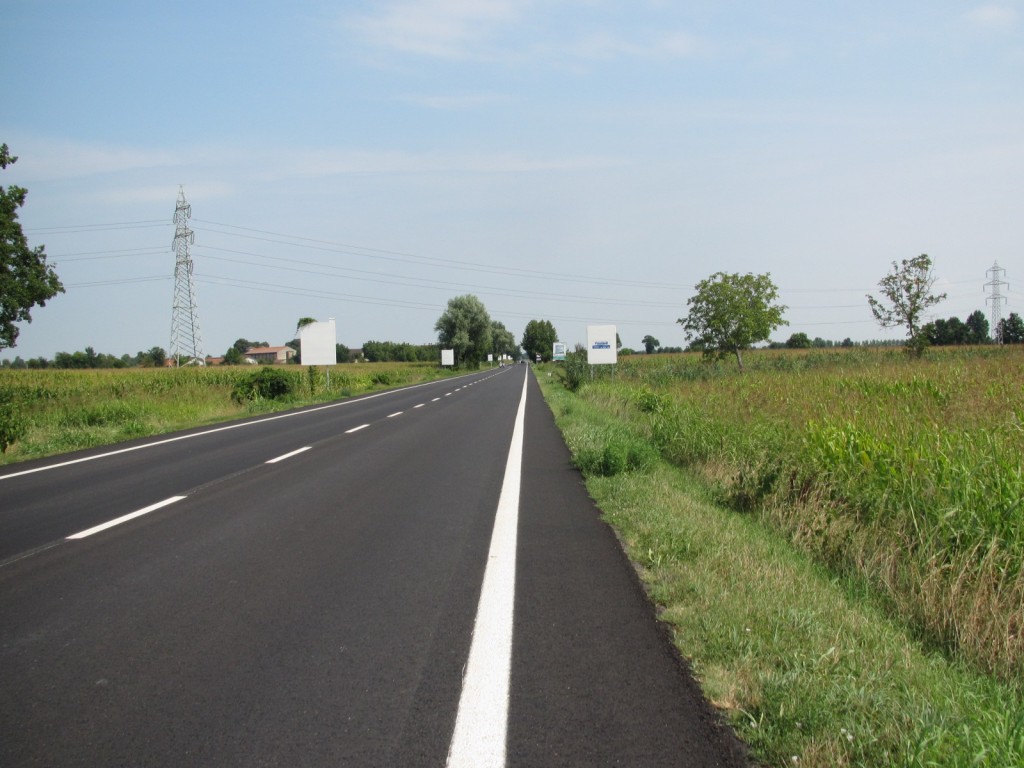 The long and straight road. 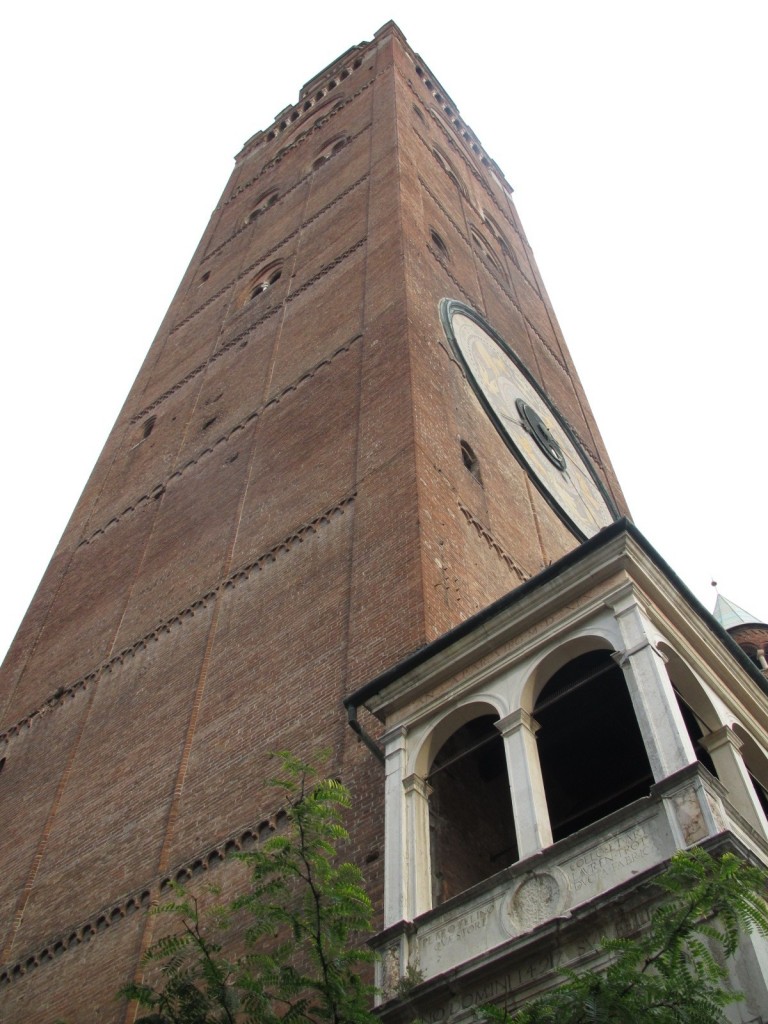 We had our snacks under the clock tower. 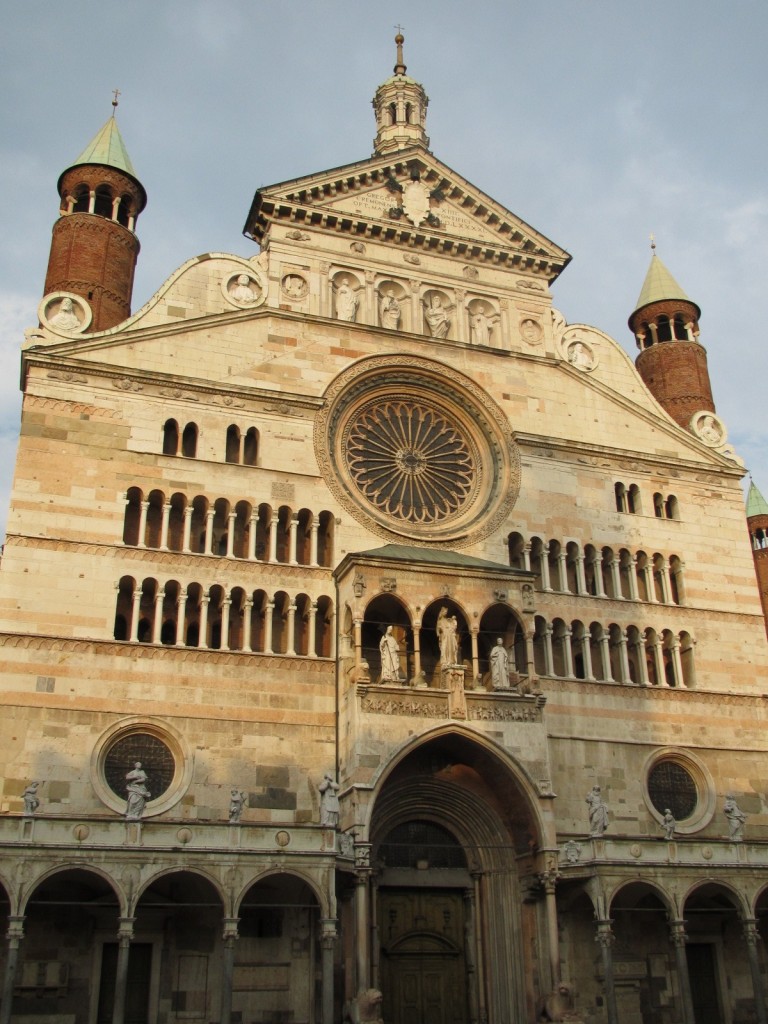 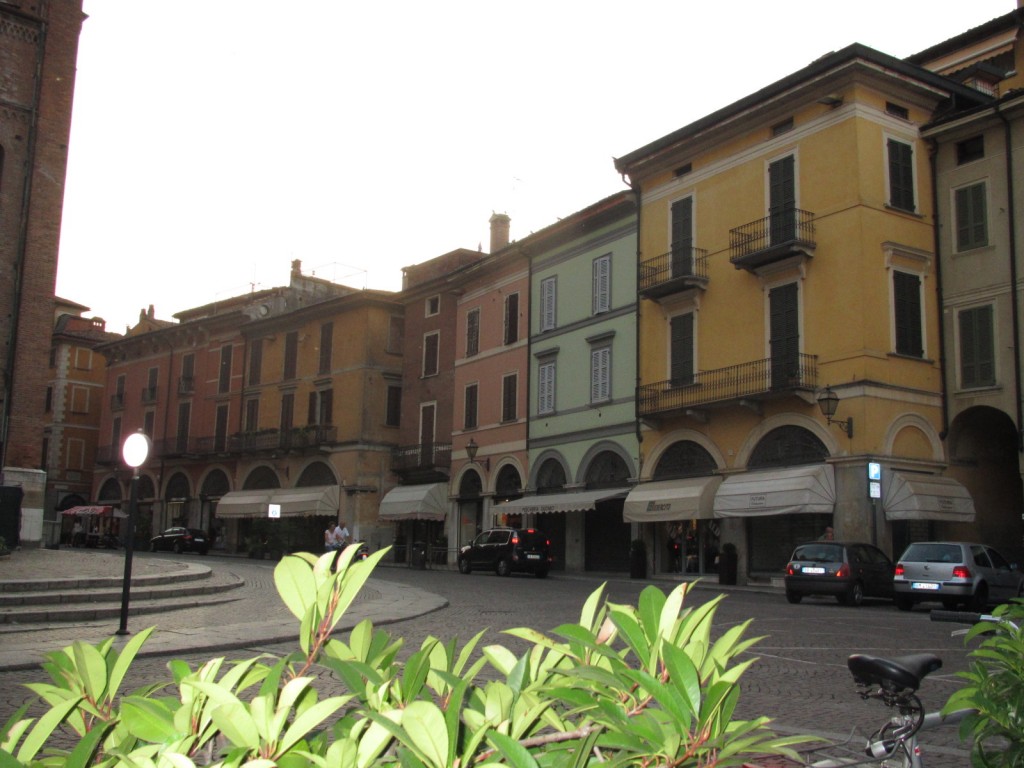 2 Responses to Bellagio to Cremona