We left Zurich in SUNSHINE! It was the first day that we didn't have any bad weather predicted. That being said, I still put on some leg warmers because I have no faith in the weather being kind to us. During an early moment of getting lost, I quickly shed them and enjoyed riding in what appeared to be summer weather. Getting out of Zurich was a pain in the ass - lots of construction and bike paths that disappear into oncoming traffic of a one way street. But, since we were in no hurry - this was essentially an off day as we took it very easy in preparation for tomorrow - we just went with the flow and soon found ourselves out of town and ready to roll. Lots of rolling countryside like yesterday. I wanted to get a picture of a cow because all the Swiss cows apparently have cow bells and the sound is very loud - no Swiss cow will ever sneak up on you. I actually felt bad for them and wondered if they went crazy having to exist with so much racket. Wait for it..... the source of Mad Cow disease? About 2 hours or so into the ride, we finally caught sight of Lake Zug but our path only allowed us some brief opportunities to admire the view. We then rode for awhile before coming upon Lake Lucerne. During this time, we also caught our first glimpse of the Alps. They're big and despite my attempts to capture them in pictures, you just can't image how big they are until you're here. And, the truth of the matter is that the ones we can see here from Lake Lucerne aren't even the big ones. We're sitting in a cafe (I'm writing part of this after the ride - I usually do it the next morning but our hotel office wasn't open when we arrived) and the tops of the very highest mountains within eyesight are about the height of the pass we will ascend tomorrow as we go south through the really big mountains. Yikes. The ride around Lake Lucerne was billed as a treat, and it was all that and more. There is a bike path all the way around the north and east shores we followed, and that path was often cantilevered above the lake and also found its way through its own tunnels. Fortunately for us, the Swiss have made a considerable effort to provide good cycling access around such a beautiful lake. I took a lot of pictures and I hope you all enjoy them, but they simply cannot convey the beauty and the scale of this place. I know I'm not a great photographer, but even if I was I doubt that it would really help. This is kind of like being on the floor of Yosemite - something you really have to see for yourself to get it. After finally checking in around 6pm, showering, and laundering our clothes, it was 7pm and time for dinner. Our hotel advertised its restaurant as a pizzeria, but we weren’t sure we wanted pizza, and since the room rate was outrageous, we didn’t want to spend any more money there. Instead, we walked down the street to a few more places only to find nothing but the usual German food (about half the places were closed for the season), and since that is what we had for lunch, pizza was sounding pretty good. In fact, it was starting to sound amazing as I was starving after having not eaten in quite awhile. So, we walked back to our hotel to order pizza and learned that they didn’t have any! Instead, I got a bowl of spaghetti with an uninspired marinara sauce. The good news is that the weather was outstanding last night. Paul and I sat on our balcony overlooking the lake and admiring the moonlit Alps until about midnight. This morning, the weather is expectedly cooler but looks like it will warm up nicely. We are expecting the possibility of thunderstorms later in the afternoon, so we’re going to try to get up and down the mountain by 1 or 2 pm. Trip Distance: 580 miles The elevation gain shown below does not include Garmin's own post-ride GPS correction because of the tunnels we rode through. It's generally safe to add about 20-30% with such a correction. 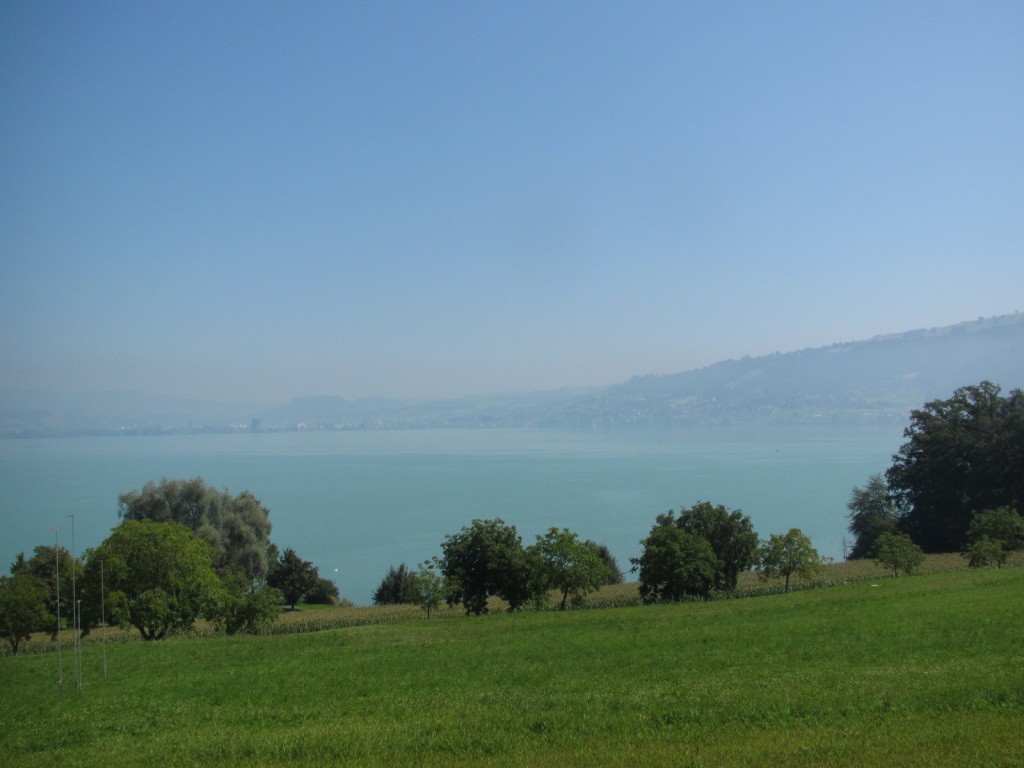 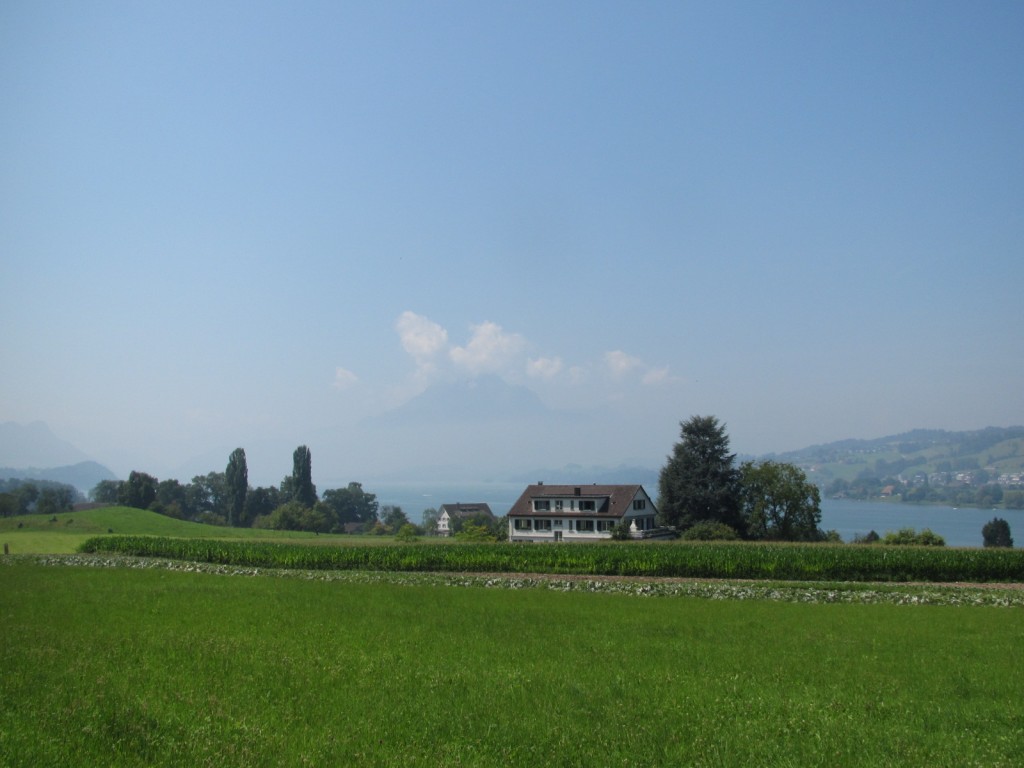 One of our first glimpses of the Alps - you can just make it out in the background through the haze. 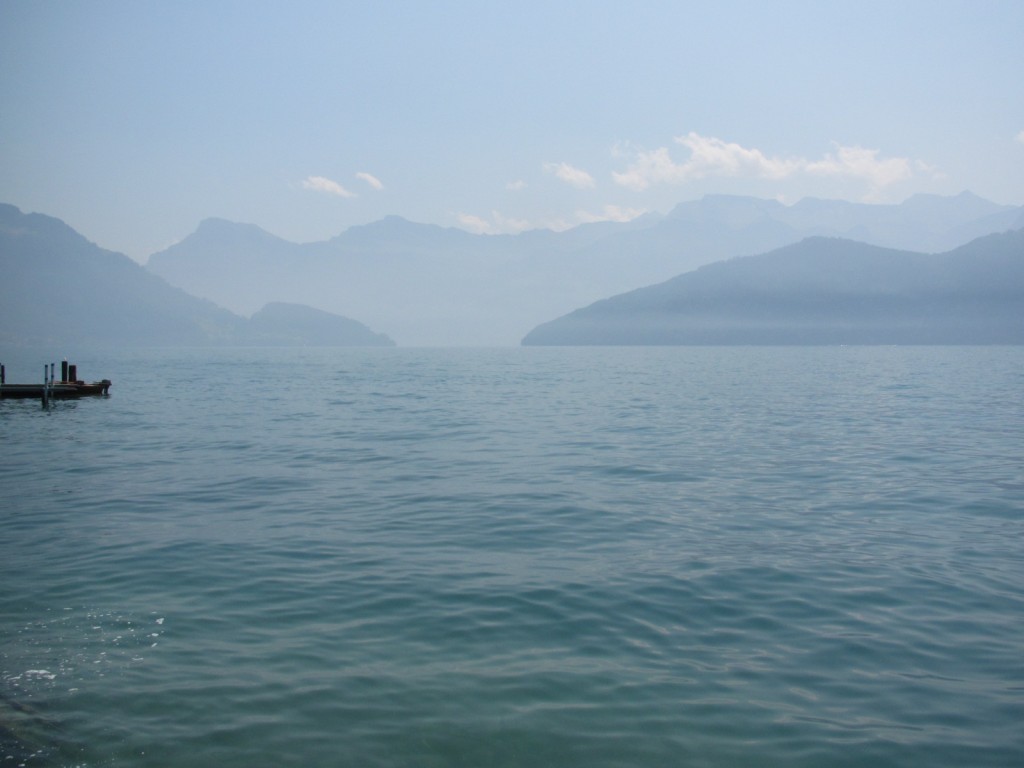 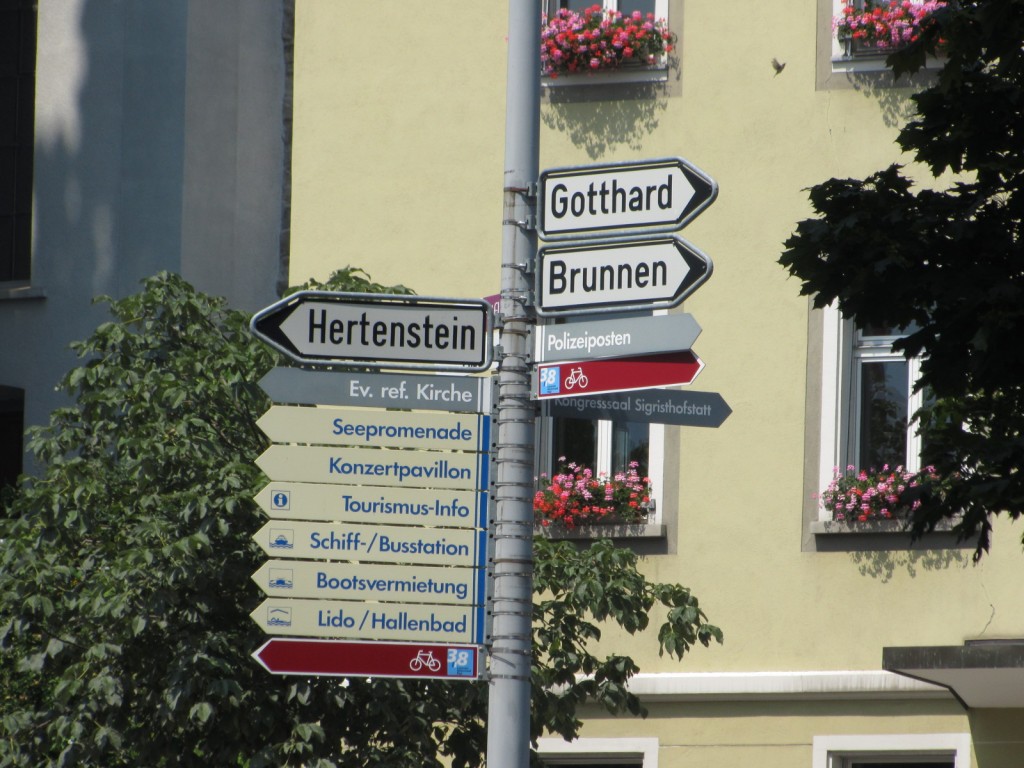 The sign points to Gotthard - the pass that preoccupies our thoughts today as we will climb it tomorrow. 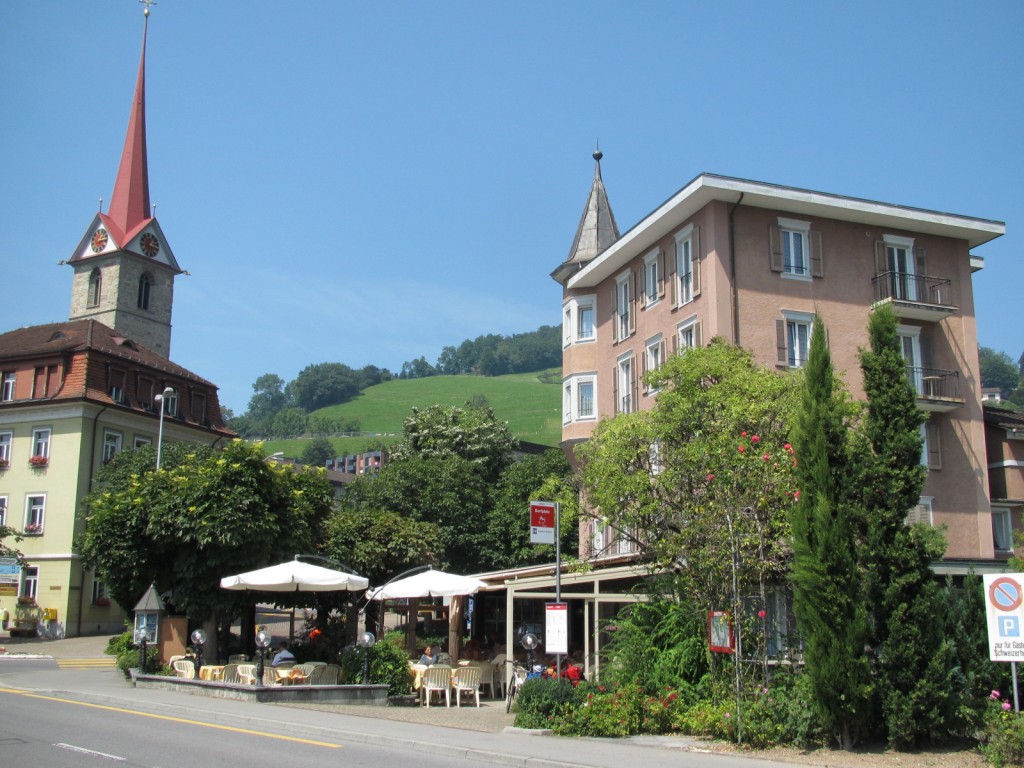 The cafe where we had lunch. 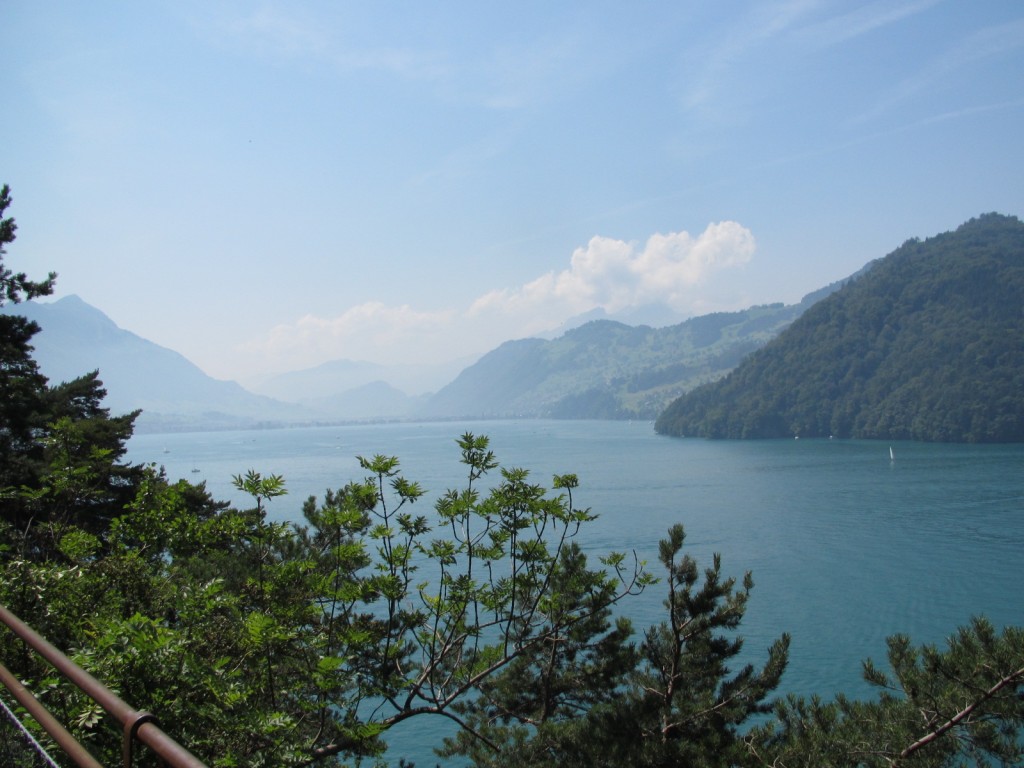 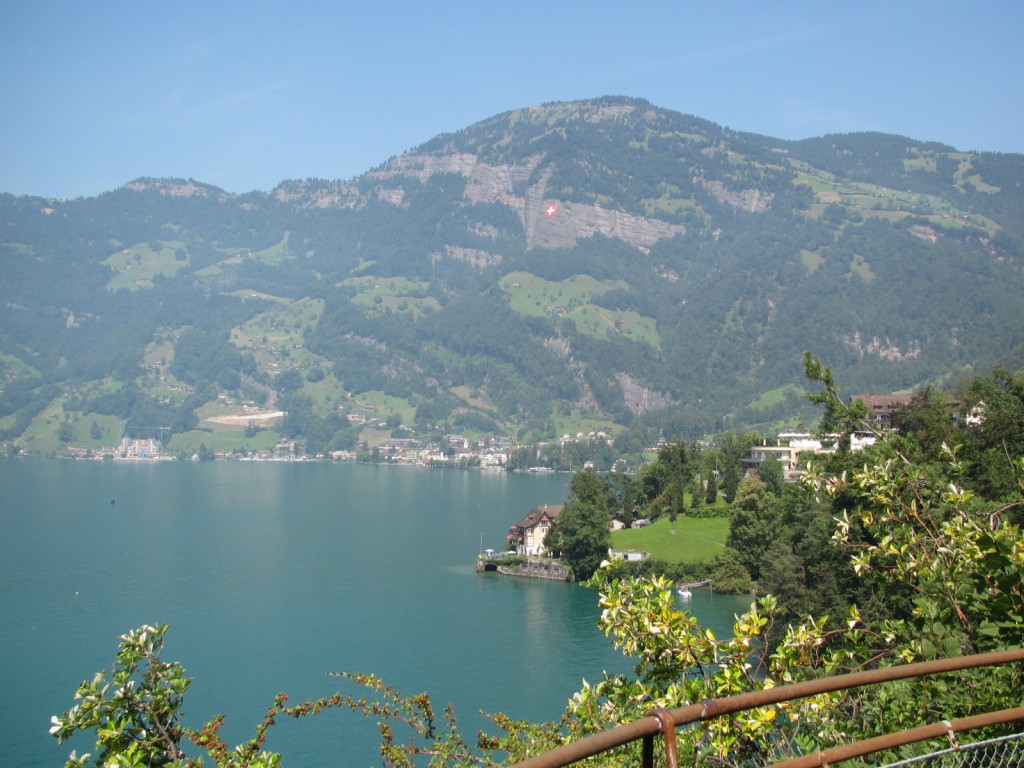 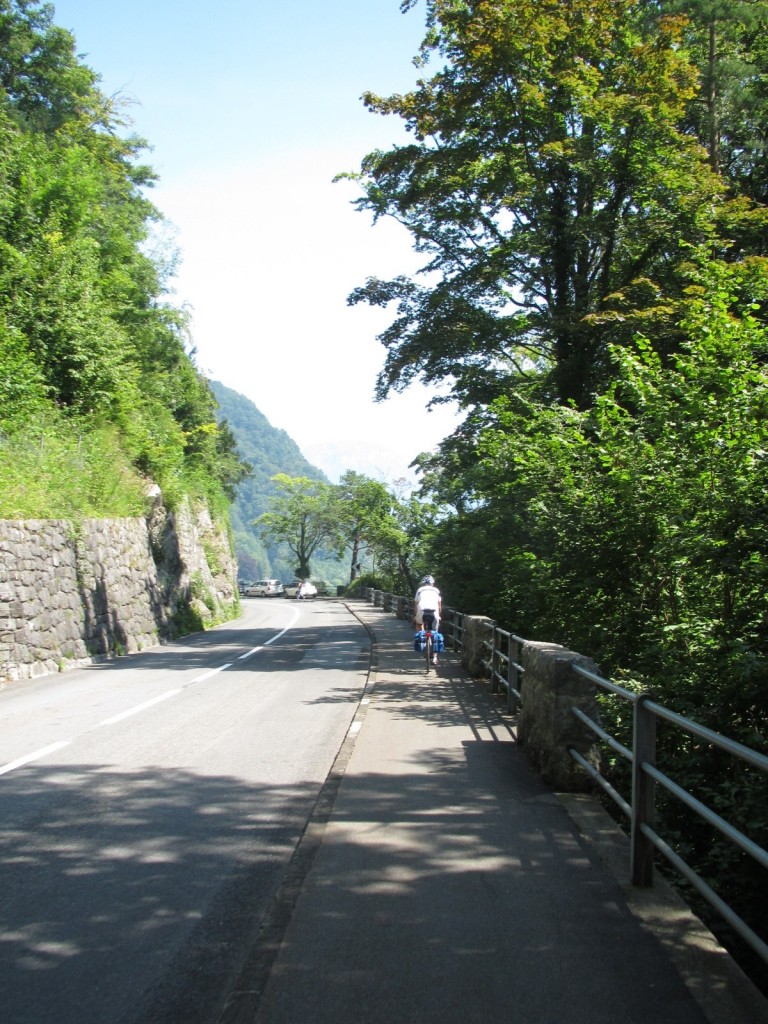 The bike path along Lake Lucerne. 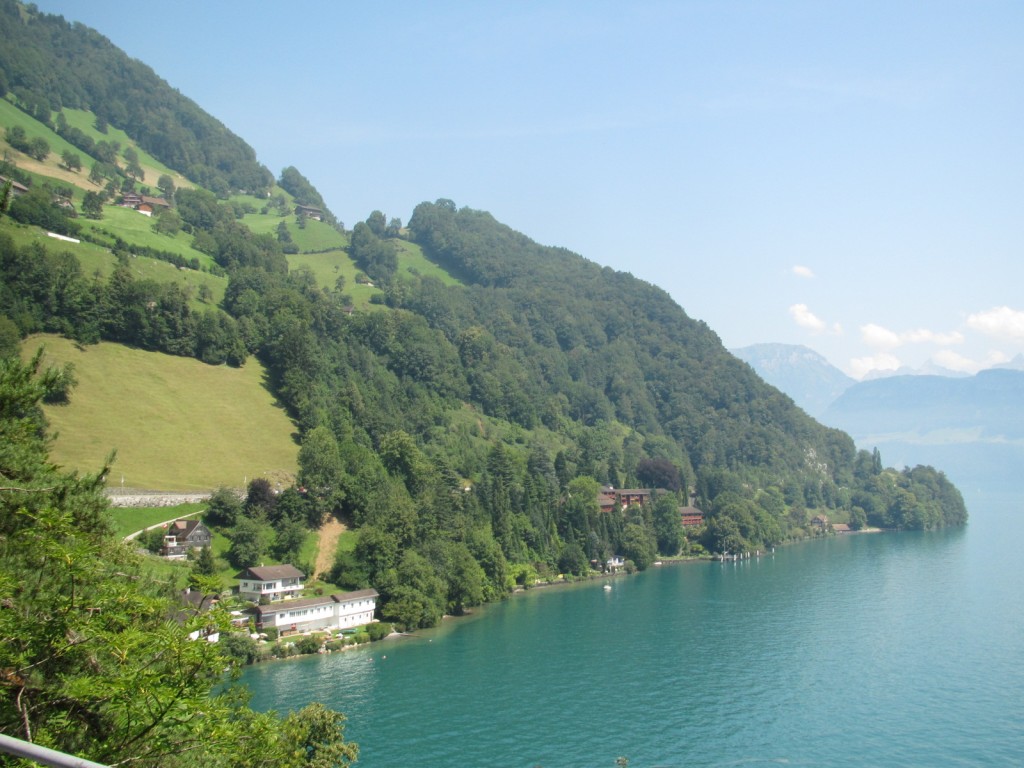 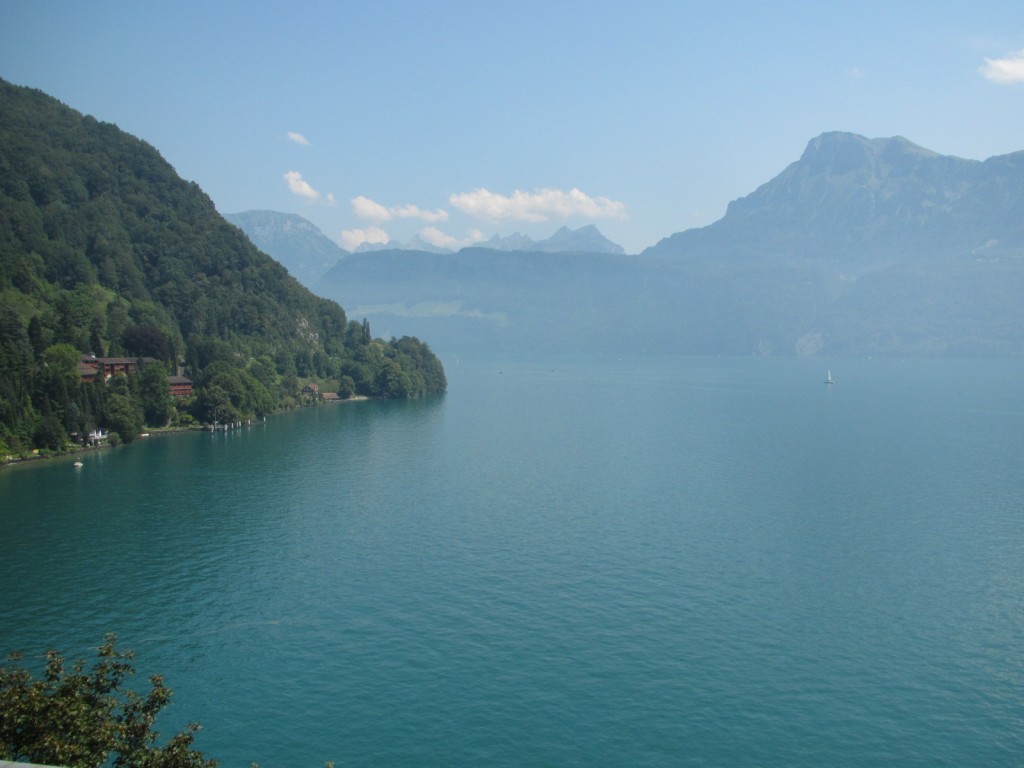 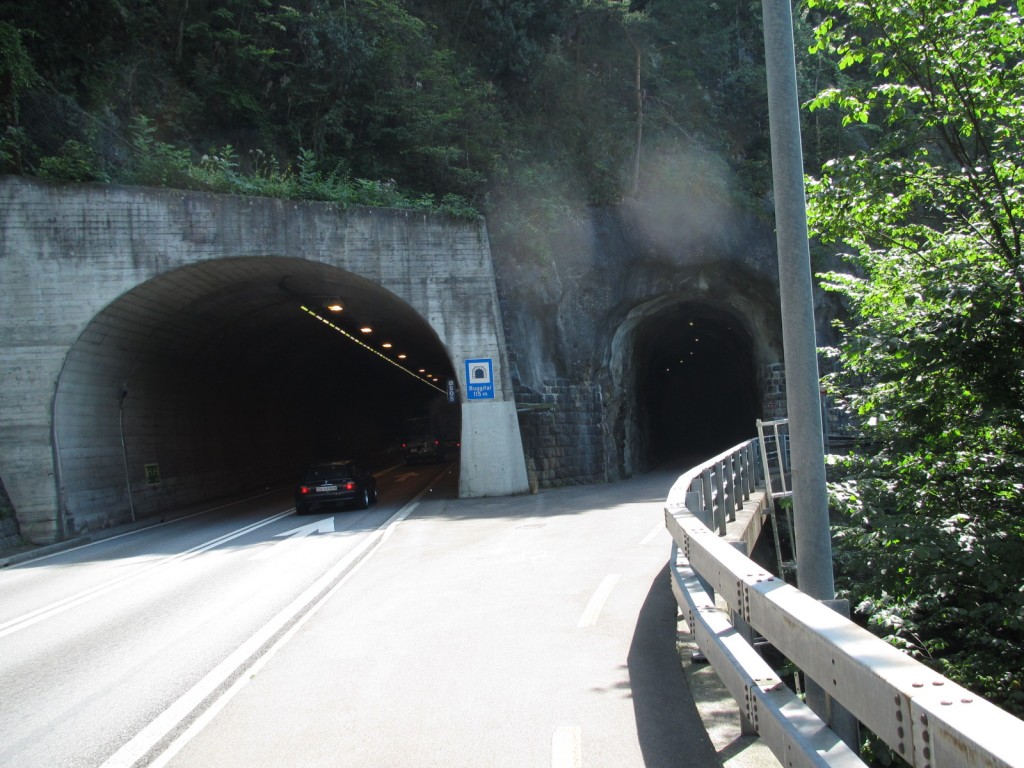 Bicycles get their own tunnel! 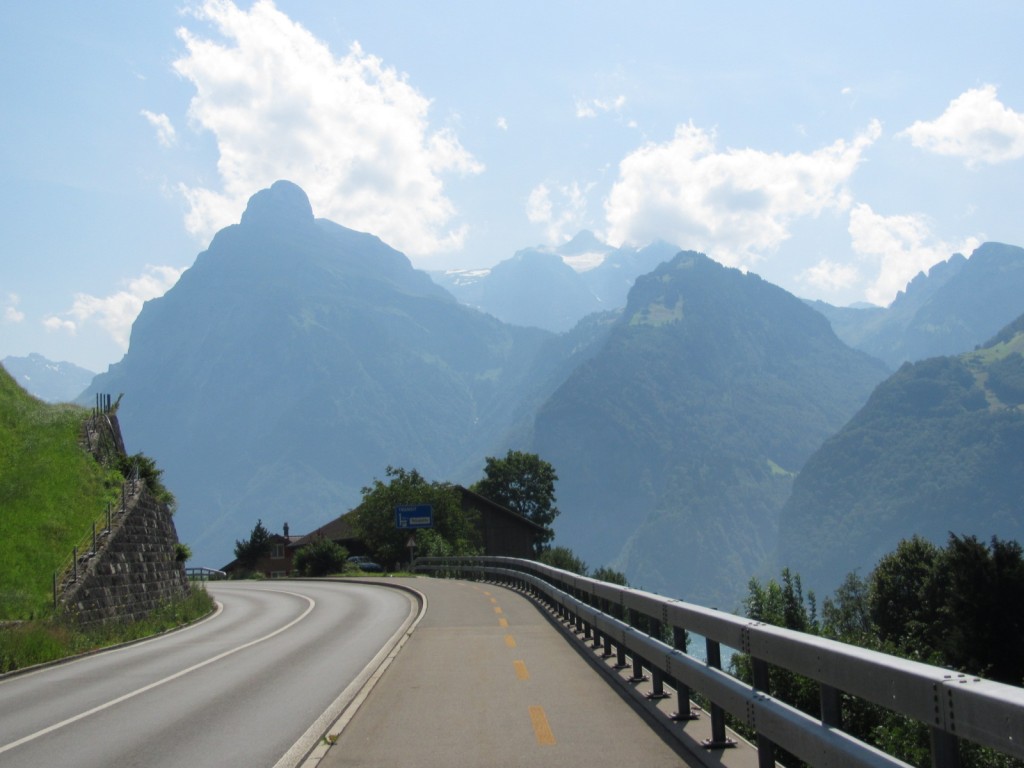 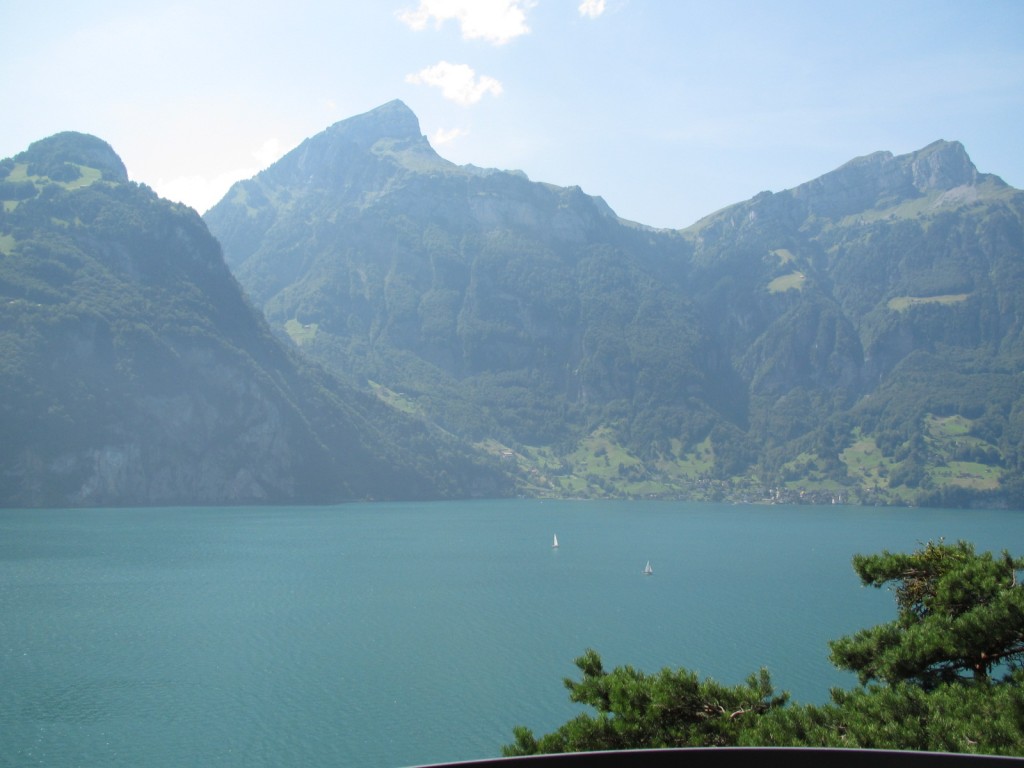 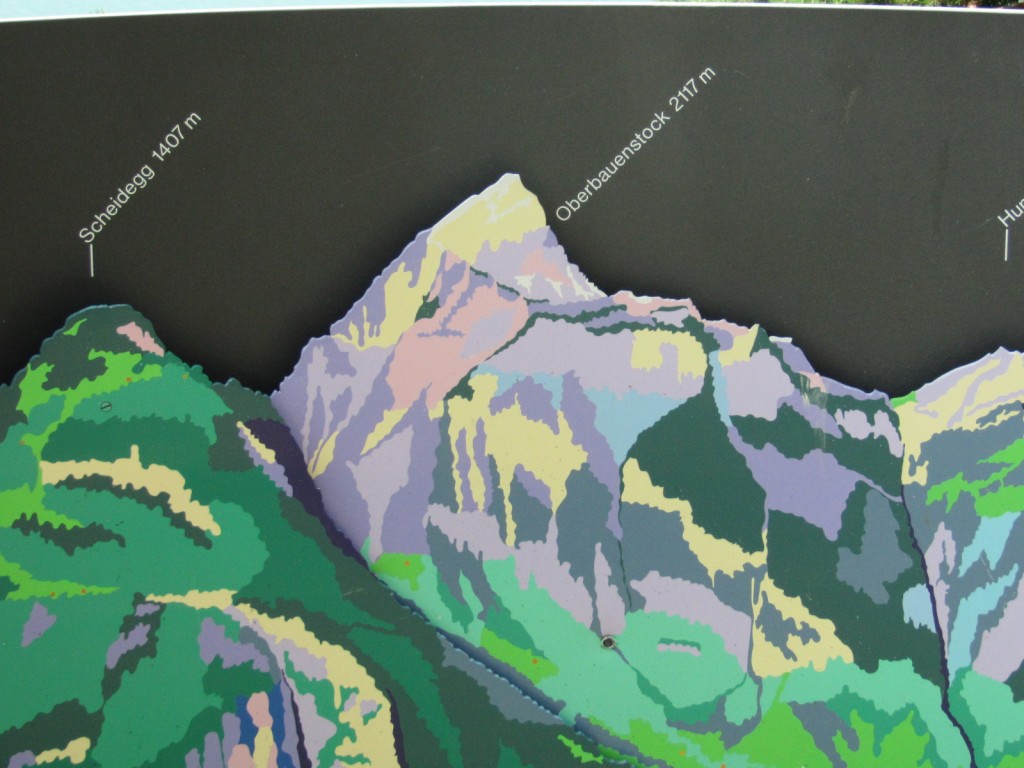 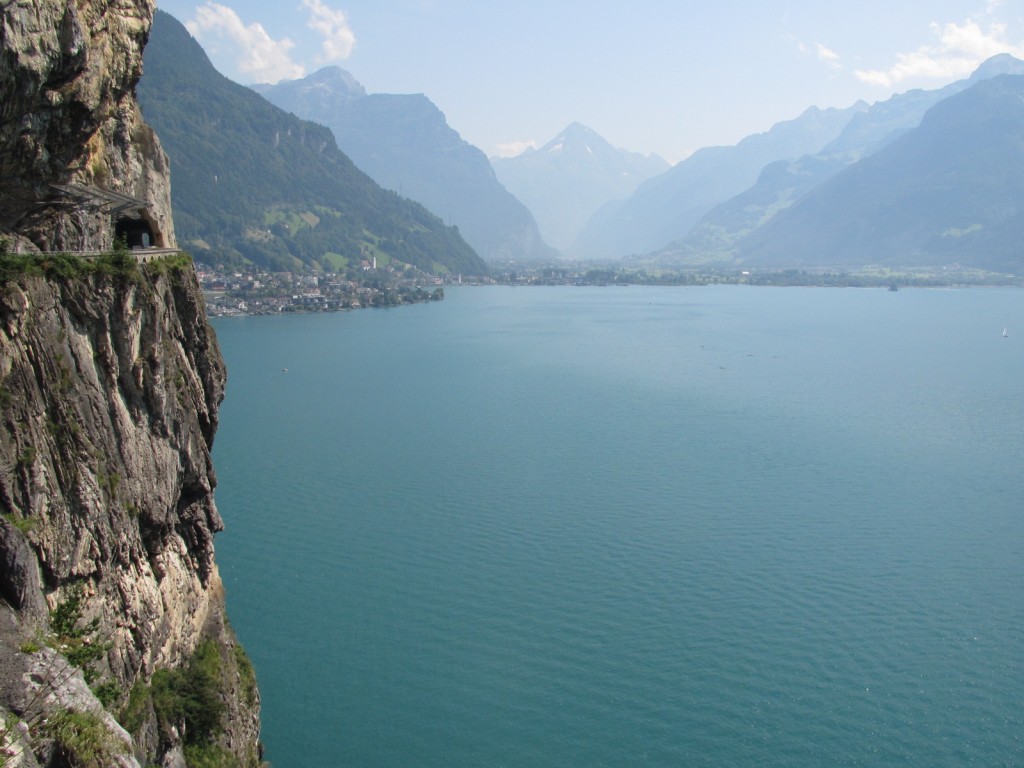 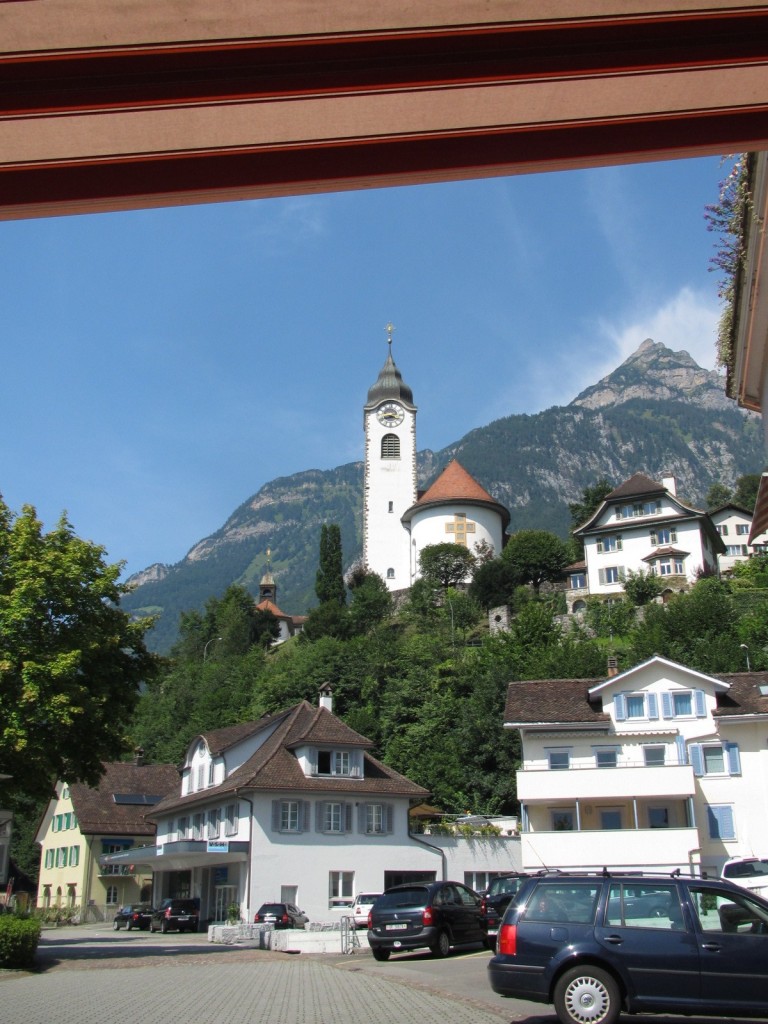 Fluelen - our hotel is just to the left and up the street a bit.

3 Responses to Zurich to Flüelen