We said goodbye to two days in Baden-Baden and were anxious to hit the road again. A day off the bikes is a good rest but both realized that we missed the riding, even on mornings like this that were in the chilly high 50s. Being a Sunday morning, the traffic was very light and we made quick progress on the empty roads - easily our fastest time to our first snack break (28 miles in 1 hr 30 mins). It seemed to have gotten colder, so we bundled up a bit more as we enjoyed a "quick" cappuccino and pastry - sometimes the German service is disturbingly slow. I think there were about 4 people in front of us and it took over 20 minutes just to finally get the chance to say we wanted a pastry and coffee. We turned into the Black Forest and followed a highway (sometimes on it, and sometimes on the bike path) until about the 50 mile mark where we stopped for water and to get ready for the last part of the ride that we knew would be uphill. The climb started gradually in the 2-3% range and seemed like it was going to be much easier than expected. Then, about half way up and after riding through 2 tunnels, the road turned upward and got increasingly steeper so that we spent a lot of time on 6% grades that then turned into 7-8% in stretches before finally reaching the top. It's hard to say exactly where the climb started because it was gradual, but we figured we climbed about 2000 ft in exactly one hour over a distance of 13.5 miles. These numbers are important to us because we're using them to estimate how difficult Wednesday's climb over St. Gotthard's pass will be. That climb is about 5400 ft over 21 miles, 2 of which are in the middle and relatively flat. Basically, that means Wednesday's climb will be over 2x in elevation gain and less than 2x in distance - no matter how you look at it, that's steeper and longer. The good news is that neither of us used our lowest gear getting up into St. Georgen. One curious thing about our ride was that even with the long climb at the end, it was still our fastest average pace at 16.1 mph. The reason is that we had very little difficulty with navigation and riding on highways and regular streets is a lot faster than bike paths. St. Georgen is a very small town up in the hills and we didn't do much after the ride other than get cleaned up and go drink a few beers with a snack before going to dinner. For my snack, I ordered a salad with cheese that somehow turned into a large ham and cheese sandwich, but I ate every crumb. Paul took another stab at sausage with curry sauce and french fries and got what he expected. Dinner was at an Italian place recommended to us by the friendly lady running our hotel and was indeed good. We both had minestrone soup, a salad, and both ate a large pizza. The day's ride was the hardest I have ridden since being here, but I was still totally stuffed after eating dinner. Sorry for the lack of pictures, but the morning was overcast and gloomy and I didn't feel like taking any pictures. I was going to take some photos of the town before leaving, but it's fogged in and that might not happen. If it clears a bit, I'll try to take some pictures before leaving and add them later. EDIT: I added 3 at the bottom that I took before leaving St. Georgen this morning. We made it to Zurich, so look for our update about that tomorrow. Trip Distance: 457 miles 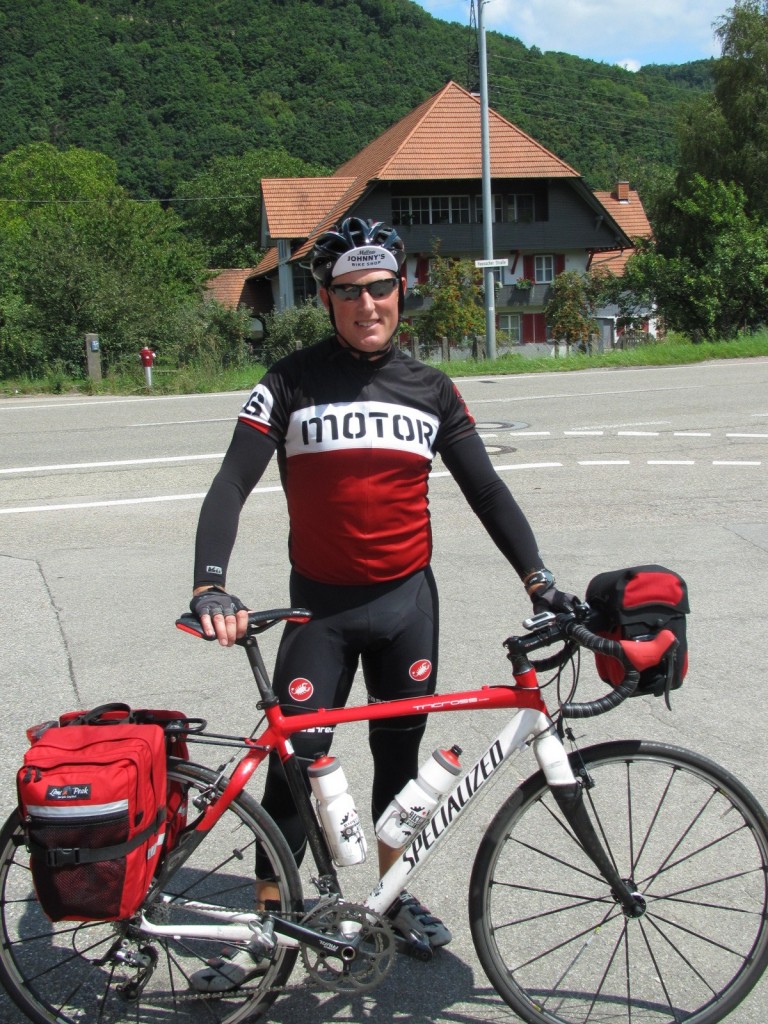 Taken at the base of the climb. The sun had just come out, so after the picture I took off the arm and leg warmers for the climb. 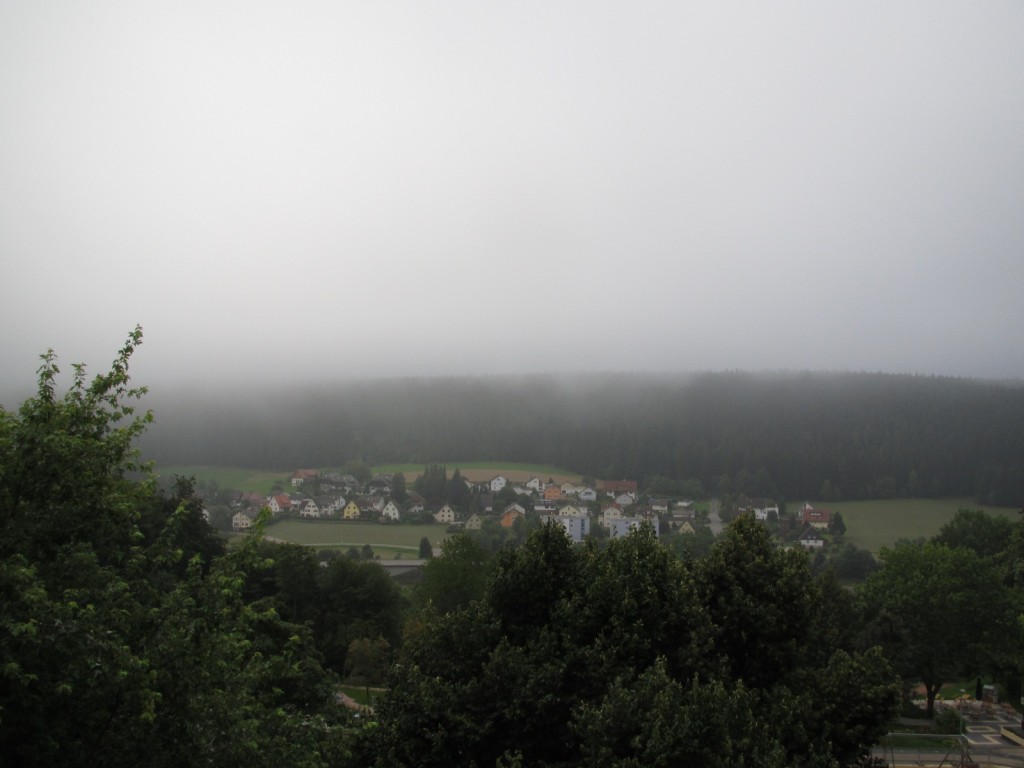 Looking out from our hotel - beautiful weather for a ride...?! 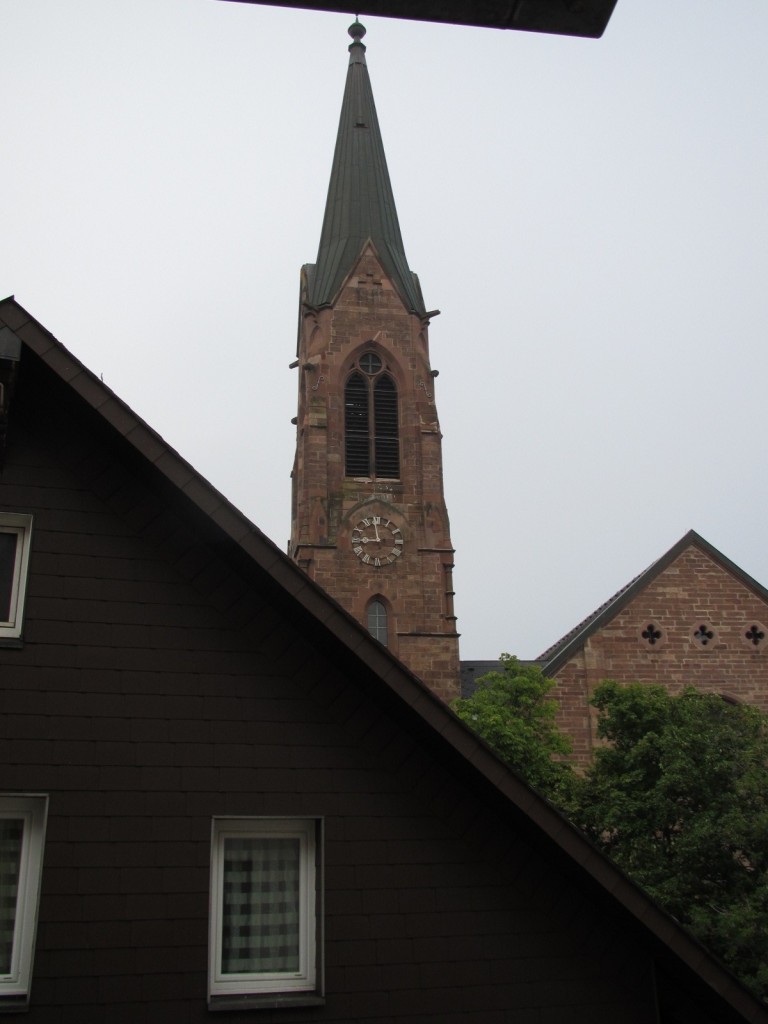 The church and its very loud bells (every 15 minutes night and day) were very close to our hotel room - this is taken from the balcony. 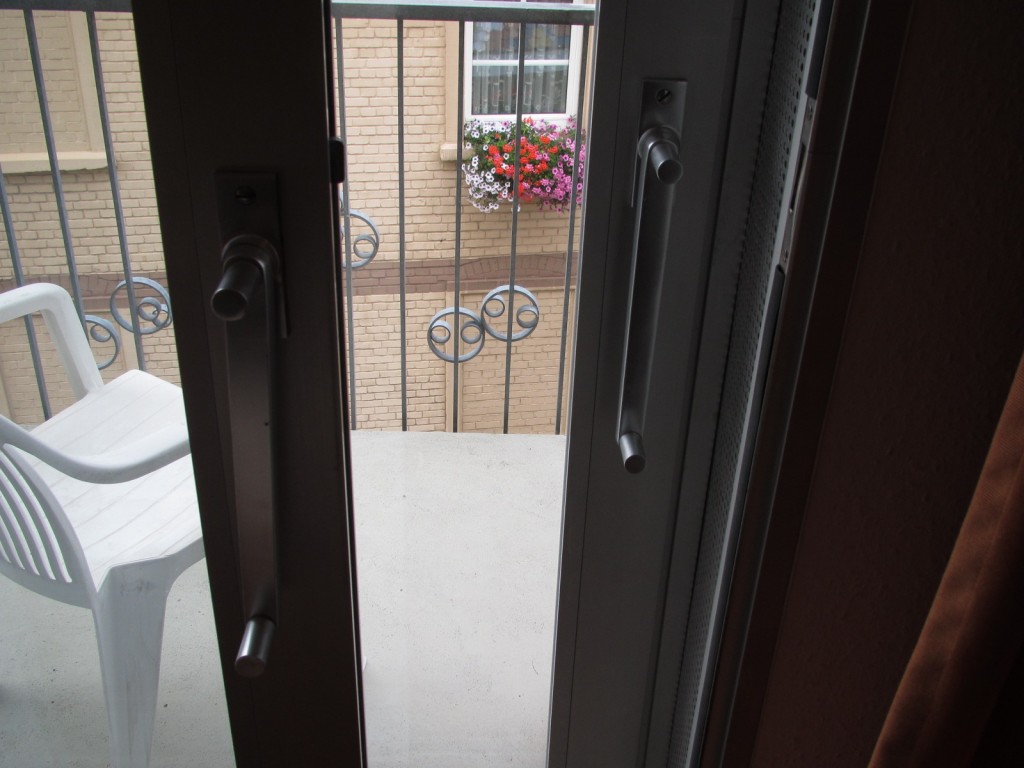 These double sliding glass doors look like they were designed to keep out polar bears or something very large, but luckily the doors kept out the bell noise.

4 Responses to Baden-Baden to St. Georgen